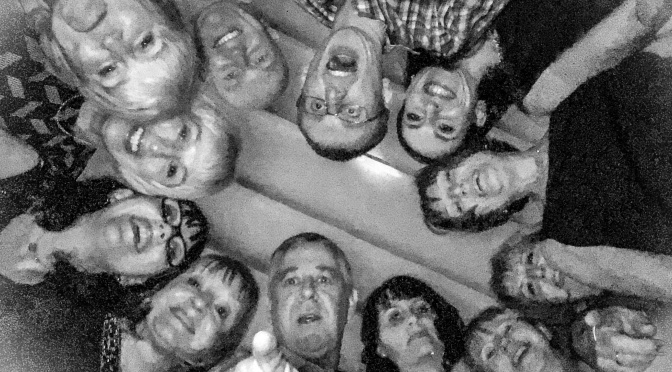 So here is our latest update. And about time too you might say. Well, I’ll have you know that the excuse best employed here is that we are SO BUSY. The rehearsals, yes, but there are many other strands that are now being actively followed up. At any rehearsal you can find Sue scribbling in her book adding yet more props to the already extensive list as Gareth adds another little detail. Sourcing props can be a challenge but as this play has a Xmas theme then shopping for baubles is somewhat easier due to that impending event on December 25th. If you hear reports from Xmas-stuffed Garden Centres of a surge in sales this year it’s probably us.
This play is sound-rich. It is obvious when you read the script but became more obvious when we got the Sound and Lighting Cues spreadsheet from Gareth and I had to load more paper in the printer. Without doubt this is the largest list of sounds and effects we have attempted so lifting us to another welcome challenge.
Next up (don’t you just hate that expression, sounds like Channel 4) is to create our publicity photo and the production of flyers and posters and then onto distribution. 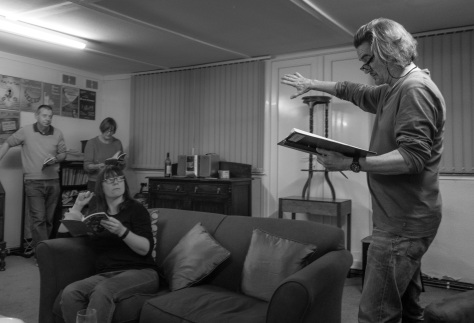 And amongst all that we continue with rehearsals and the cast are desperately trying to learn lines.  We finished all the blocking last week. Blocking Jim, but not as we know it.

This has been very detailed blocking that has covered not just our basic moves but how, we move, our whole body language, what we do with our props, our words, their delivery, expression, the pauses, the emotion – and what our character is thinking or reacting to and why. All this is scrawled in our scripts each in our own versions of shorthand.
Now it is time to put all of that into practice and get to that hard point where we attempt do all of that without having to look in our scripts….
But in the midst of all that we still had time to let our hair down at our annual Christmas Dinner Dance. 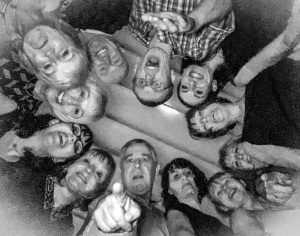 Find out more about A Kick In The Baubles
Tickets are available now – reserve your seats here.

In our last post we said we would follow the production process of ‘A Kick In The Baubles’ (we shall use KITB for short) and that this post would explain why our first rehearsal illicited a WOW reaction.  Here it is.
We are in our rehearsal studio, The Forum, which is an over-grand title and an over-grand description of this aging white hut crammed with more old furniture and bric-a-brac than Gilbert Baitson’s furniture warehouse on auction day. It’s the theatrical equivalent of the junk stored in a bloke’s shed – ‘don’t throw it, it just might come in handy sometime….’ The accuracy of that analogy continues to the point that when we do eventually have a periodic clear out we can be guaranteed that we will need the item that we just threw away for the next play.

I digress. It is our first rehearsal of ‘A Kick in The Baubles’ with Gareth in the chair – well, he’s standing actually with an excited energy and enthusiasm that is infectious and motivating.

We had started straight after our society general meeting that put ‘Spirit Level‘ to bed and included those other boring but necessary agenda items that are needed to keep an amateur drama society alive. As he gave us his vision of the play, explaining in detail the set design, the tone and direction of the drama and the characterisations it became clear he knew exactly what he wanted to the nth degree. Of course, having produced it before he also knows what worked and what didn’t. What was immediately clear was that this was going to be a very funny and demanding fast-paced play and we would need to be on form.

It’s an early scene and only two characters on set, myself and Jayne, both of us juggling script and pencil as we feverishly write notes between performing the moves and the dialogue for the first time.

This is different! As a group we are locked into a tried and tested formula over our 12 week rehearsal period – generally blocking; learning lines; practising moves and dialogue; then script down, trying to remember our words; add the props when we are book free; then practice, enhance, develop the detail. But we asked Gareth to push us, not to adopt our practices but to try his approach if we are capable.

Usually we would be racing through the dialogue only stopping to write the basic moves – head stage right and sit on chair and so on. But here we are writing copious notes as Gareth enthusiastically tells us what our character is thinking, what our hands are doing, our body language, what we are doing with imaginary props – painting a wonderful picture very early on of what we are aiming to achieve. For those that are watching this process I can see smiles, excited grins, dropped jaws and a little bit of anxiety – “gulp, we’re next.”

Gareth’s smiling enthusiasm and clarity is inspiring and demanding. It might only be 24hrs since we packed away the set from the last play but we are rolling – and it feels good. It may feel intensive to start like this but it’s a great investment early on with plenty of time to build upon a solid foundation.

Follow this website for more news and updates by registering your email  – simply scroll down the webpage to the ‘Follow Us By Email’ panel as shown;

Find out more about this play here
Tickets are available now – reserve your seats here.

As we begin twelve weeks of hard work for our next performance in January this seems a good opportunity to follow the process from the beginning of how we put on a play production with some regular (well, irregular) posts in this blog as we progress.  No, I don’t know what a blog is either but it sounds good.

Last Saturday we were performing our final night of ‘Spirit Level’ and six days later we have already had two rehearsals for the next. Now that is unusual but we need to get a Kick start to Kick In The Baubles – it’s a full-on comedy and we aim to be ambitious and we are asking our professional director to push us. Gareth Tudor Price is well known locally from his time at Hull Truck working with John Godber as Artistic Director.  He has been a long time supporter of our group and, his freelance production employment permitting,  has offered to produce this play with our own Janet Drewery.

When he heard that we were reading this play over the summer break and were considering it for our 2016/7 season he very kindly offered up his spare time to guide us in its production.  He had originally commissioned, produced and developed this play at Hull Truck and is keen to see what we can do with it. Having just finished his production of ‘Moby Dick’ in York, Gareth was keen to get some rehearsal miles under our belt.

Fresh from set-destruction the previous day, last Monday’s meeting had a pretty full attendance for a formal general meeting but then went straight into the first rehearsal night for KITB and….wow!  But more on that in our next post so if you haven’t already, sign up with your email to ensure you don’t miss a thing!

Booking? Click on this link: Use our ticket enquiry form