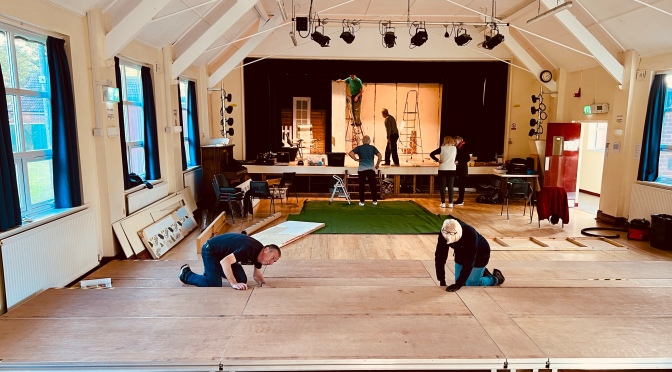 Last night saw our final rehearsal in the confines of The Forum before we transition the play to the stage. Today, Friday, we began our long weekend of set-building, one which requires yet more time sacrifices from the members and helped, thankfully, by our other practical helpers that Richard always manages to round up from the pub.

This is hard but exciting work as we create the actual set that until now has only been a vision in our minds and represented by blocks and pieces of tape on the floor.

With just a few days to go to first night we are in the fortunate position of having already sold the majority of our seats.

There are a few left for Thursday and Saturday but be quick. That said it is always worth checking for cancellations. As a small society it is so important to us to sell all our tickets – not just to share our creative efforts with you, but to ensure we get sufficient income to keep going and put on our future plays.

Just a quick reminder to all our followers – if you were thinking of booking seats for our next production then it may be time to get moving as tickets are selling fast.

Thursday 10th and Saturday 12th still have seats available. Friday is virtually sold out (though it’s always worth checking for cancellations).

You can find out more about this play here.

Booking information is on the poster above or contact us via our Booking page here.

Whilst the rest of us rehearse for our next production one of our well known members, Rob Newton, Petuaria Players stalwart, was training for the London Marathon which he ran successfully earlier this month.

We decided to take a break from promoting the play and take the opportunity to talk to him about his recent feat:

Rob: Thank you. And thanks for asking me all about my personal journey – I certainly feel proud of what I…

Steve: Yes yes, I believe you achieved a running time of 3hr 49m 18s! That’s excellent. Did you know that our running time of ‘The Final Test’, our next play, is more in the region of two hours?

Steve: You obviously love running, did you know we are ‘running’ a play in November?

Rob: Well I did yes, but as for my running and this year’s London Marathon I felt that it was very….

Steve: Ok, moving on, you must have seen a lot of the London sights on your trip. Did you see any posters for our next play “The Final Test”?

Steve: Keeping going for over 26 miles must be a challenge. What helped to drive you on? Was it the thought of getting back to drama to see ‘The Final Test’?

Rob: Well it was certainly a challenge and you do need to be mentally focussed. It’s an interesting fact that….

Steve: Mmm, yes, now obviously you can’t just go and run a marathon, I imagine it takes a lot of dedication, hard work, stamina and regular practice. In that way do you think it might be similar to rehearsing for a play, for example our current production of Chris Paling’s ‘The Final Test’?

Rob: Er, in principle yes, although I do think my efforts for this event were…

Steve: Do you have upcoming plans for any more long distance running or will you be coming to our next play “The Final Test” on November 10th to 12th?

Rob: Well I shall certainly keep jogging, yes, and you can keep ‘jogging’ people’s memory about ‘The Final Test’ ! Ha!

Steve: Ok thanks, Rob, leave the funny stuff to me.

Rob: But yes, I’ll be there. Nobody would want to miss ‘The Final Test’ at Elloughton Brough Village Hall in November.

Steve: Well said Rob, once again well done in the Marathon and well done for helping to promote our play today.

Rob: Mmmm. Thanks. I think.

Seriously though, thanks to Rob for allowing our spoof interview and congratulations on not only running the marathon but raising around £1500 for Cancer Research UK.

Our next production is progressing and it may be time for you to think about booking tickets for the show.

Scheduled a little later than our traditional play week, The Final Test will be onstage November 10th, 11th 12th.

THE FINAL TEST by Chris Paling
A touching and poignant comedy about marriage, cricket and the dangerous lure of Bexhill-on-Sea.

Peter and Ruth have had a long and happy marriage – or so Peter believes. They each have their own interests; he loves cricket, she enjoys travel. But all is not well, as Peter discovers one afternoon when he’s dozing in his deckchair listening to the Final Test from the Oval. His wife announces she has sold the house and is moving to the coast. When the new owners move in, they discover much more than they bargained for!

Find out how to book your tickets on our BOOK NOW page by clicking the link.